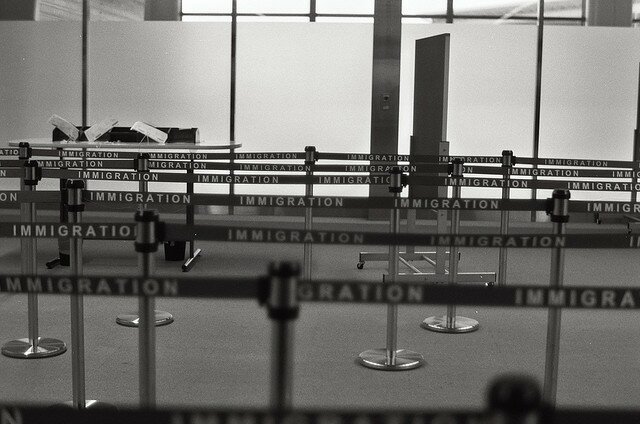 I have developed an irrational fear when traveling internationally: going through customs and immigration. I have no reason to cause suspicion, yet I can’t help but feel on edge whenever I’m about to cross a border.

My passport photo is from when I was 17, a blonde without bangs (a fringe). What if they think I am a fake? What if they believe I am using a stolen passport? It’s not my fault passports don’t expire for, like, 10 years. People change, you know?

It started when Daniel and I were in a long-distance relationship. He was in Vancouver, Canada. While I was over the border in Portland. It was roughly about a five hour drive. The border between the United States and Canada near Vancouver resembles a toll booth with nicely manicured lawns. There in the middle, stands a tall white monument with both countries flags on top. It’s appropriately named the Peace Arch.

The first time I made the drive was with Daniel helping him move to Vancouver. It was a rainy Friday night and the queues were exceedingly long. I was watching the windshield wipers swish back and forth while singing when I noticed Daniel go quiet. He suddenly turned the radio off and said he needed silence to calm his nerves. That’s when I started to feel anxiety creeping in.

At the border, there are around 10 lanes to choose from. Do you choose a row based on the one that’s going the quickest? Or do you pick the lane with the least intimidating customs officer? I went with the former because a) the officer might not question why I’m no longer a blonde and b) it was too dark to see what any of them looked like.

As we inched closer to the booth, I felt a sinking feeling in my stomach. I hoped I had made the right choice of lane. Then I spotted in the lane next to me, a car was getting its trunk checked. Oh, no! I hope that doesn’t happen to me. My trunk is a mess!

It was our turn next. My heart was beating fast. My palms were sweating. The light turned green. I pulled up slowly to an unimpressed Customs Officer.

“Passports, please,” he said.
“Here you go,” I said smiling, hoping to ease the tension.
“Where are you coming from, and how long are you here for?” he asked, straight-faced.
“We’re coming from Portland, Oregon. I will be here for the weekend, but he is moving here.”
The unimpressed man peers into the car eyeing Daniel.
“What’s your occupation, Jamie?”
“I’m a gymnastics teacher.”
“Is that right? What ages?”
“Uhh, anywhere from 18 months to 13 years old.”
“Is it at a school?”
“No, it’s..umm…a private business.”
“Is it a big building?”
What does this have to do with anything, I wondered.
Confused by his question. I said, “Err, it’s a medium-sized facility.”
“Huh. Well, you two will need to go park your car and head inside to process his visa.”

After this, I would cross the US-Canadian border probably another handful of times. One time though, Daniel had a favor to ask of me.

Since certain products in Canada are more expensive than they are in the States, he wanted me to bring some food over for him. In particular–cheese. Being the amazing girlfriend I am, I agreed to do so. 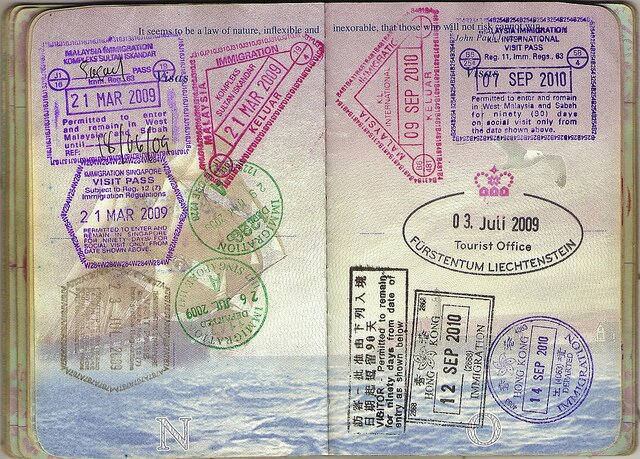 As I was packing the night before I decided to type into Google: “crossing the border with cheese.” To my surprise, I read that cheese was prohibited from going across the border and if caught, one could be fined hundreds of dollars. I just bought him three blocks of cheese. He was so looking forward to it, too. But now he is going to think I’m a terrible girlfriend who can’t bring him cheese.

I later talked to Daniel and told him what I’d read online. He said it would be fine, and it probably only meant if someone was smuggling in hundreds of pounds of cheese, like some cheese lord. Since I’m not normally a rule-breaker, this made me anxious.

I decided to hide the blocks of cheese under my seat. I also brought along a box of Voodoo Doughnuts with me, which sat on the passenger seat. I guess I  figured doughnuts were okay.

Since I was leaving after work, I would be crossing the border pretty late. Knowing this didn’t put me at ease. Cue the irrational thoughts. 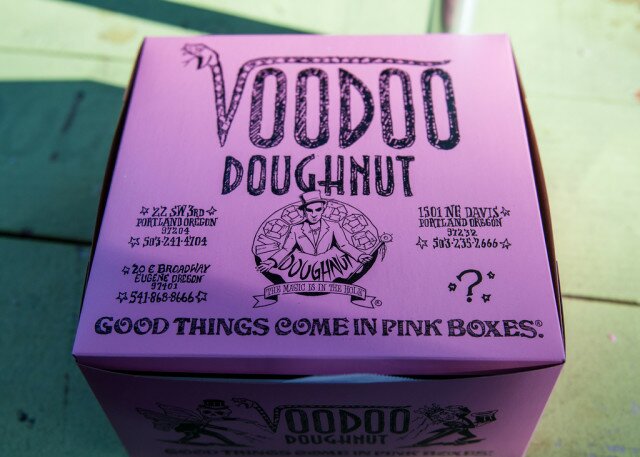 Not surprisingly, the queue was short at this time of night. I picked my lane. I inched closer to the booth. Again my heart was beating fast. Again my palms were sweating. The light turned green, and I slowly pulled up to a smiling man.

“Passport, please,” he said.
“Here you go,” I said, smiling back.
What a relief! This one doesn’t seem as intimidating.
“What are you here for?”
“I’m visiting my boyfriend for the weekend.”
“Where did you meet him?”
“Oh, on the Internet.”
“Like, through a dating site?”
Here we go again with the irrelevant questions.
“No, I have a blog that I write in and he started following it.”
“What do you write about?”
I replied with an uncomfortable laugh, “Dating and stuff.”
“Huh. So, why are you passing through so late??
“Well, I had to leave after work.”
“Are you bringing over any prohibited items?”
“I have some.. doughnuts..?”
The smiling man peers in eyeing the box on the passenger seat.
“Is that what’s in the pink box?”
“Yes.”
“All right then. Here you go,” he said while handing me back my passport.

I survived. I couldn’t believe I had broken a rule. I had just smuggled cheese into the country. I felt so badass. Daniel was pleased with his blocks of cheese, and I earned my Super Hero Girlfriend badge.

While writing this article, I decided to search again about what foods were admissible and prohibited. I couldn’t believe it, under the food items listed allowed was cheese. I think I realized my mistake from way back then– I forgot to add Canada after “crossing the border with cheese.”

I guess I wasn’t a badass, after all.

What are some of your (irrational) travel fears? How do you deal with them when traveling?